The Eudora Cardinals struggled to find consistent output for their offense much of Friday night’s battle with the Louisburg Wildcats.

However, Eudora received enough of a push from senior quarterback Andrew Ballock and his two rushing touchdowns to outlast Louisburg with a 16-15 victory.

The crucial score came with 9:15 remaining in the fourth quarter. Ballock scrambled out of the pocket and drag two Louisburg defenders into the end zone during his seven yard score. He then took off again during the 2-point attempt and broke the goal line for the Cardinals to go ahead.

Ballock’s other rushing touchdown came with 10:29 left in the second quarter when he pushed through the pile to put the Cardinals on the board. Eudora converted the 2-point conversion after that to take an 8-7 lead.

Ballock finished the game with 11 rushing attempts for 22 yards. Although Ballock scored both touchdowns, sophomore running back Austin Downing led the Cardinals on 17 carries for 57 yards.

Louisburg was able to strike first with a 1-yard run quarterback sneak by sophomore quarterback Austin Terry. With the extra point the Wildcats took a 7-0 lead with 2:43 remaining in the first quarter.

Sophomore Alex Dunn scored the other touchdown for Louisburg with a 2-yard run with 41 second remaining in the third quarter. This put the Wildcats up 15-8 at the time thanks to a 2-point conversion of their own. 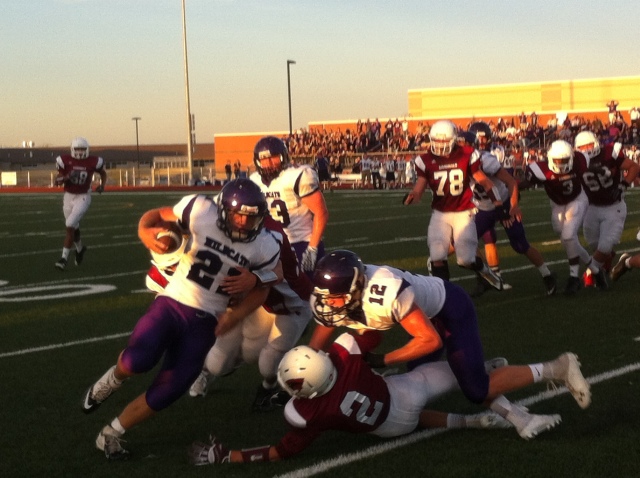 Louisburg scores the first touchdown of the game with 2:43 remaining in the first quarter. 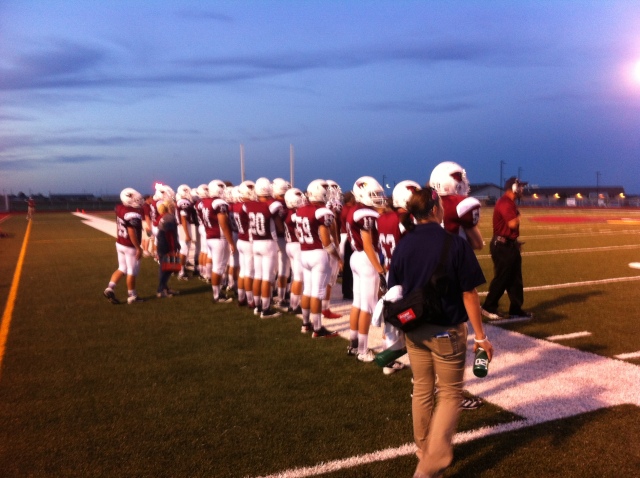 The Eudora bench looks out to its defense in the second quarter.

Louisburg junior Mason Wilde (47) is helped up by  teammates after he recovers a Eudora fumble  in the fourth quarter.

Eudora players celebrate with 44 seconds remaining in the game after stopping Louisburg’s final fourth down attempt.